Who is Heath Robinson? 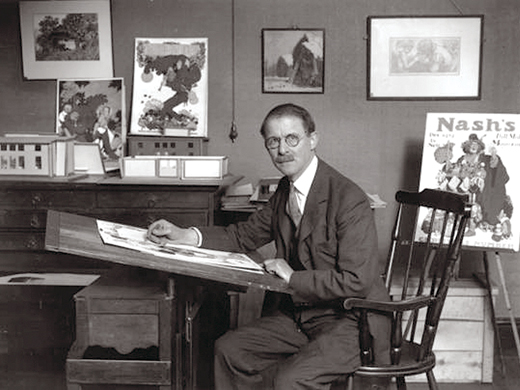 Who is Heath Robinson?

Heath Robinson was a British cartoonist and illustrator best known for his humorous drawings of over-elaborate inventions which accomplish very simple tasks.

Now a household name, Robinson drew thousands of pieces of art, spanning two world wars, the Victorian age of the machine and the rise of modernism. These times are all reflected in his work and  the phrase “Heath-Robinson” became established in the English dictionary as a term for any over-complicated contraption in 1912.

Heath Robinson was born in 1872 into a long line of artists. After studying at Islington Art School and the Royal Academy, he started his career as a landscape artist. He had little commercial success and so began drawing book, magazine and newspaper illustrations. Robinson rapidly established himself as a talented and original practitioner, providing artwork for a number of books including ‘The Pilgrim’s Progress’ and ‘Water Babies’.

In the run up to and during World War One, Robinson started drawing a series of illustrations in magazines such as ‘The Tatler’ and ‘The Sketch’. They poked fun at modern living, carrying out normal tasks such as pancake making and potato peeling to outlandish extremes, often using complex and long-winded methods. Very quickly his work received popularity and Robinson became known as “The  Gadget King”.

He was one of the first artists to belittle the Germans in WW1, showing them using laughing gas to overcome British troops and parachuting in kettles of boiling water instead of firing bullets. These images brought welcomed comic relief to British soldiers and civilians and his ironic and bizarre depictions perfectly summed up the idiocy of war.

With the Second World War however, three of Robinson’s sons were enlisted and his gentle humoristic illustrations ventured away from mocking the Nazis. Robinson called it “the disastrous war”.

Heath Robinson went on to concoct weird and wonderfully overcomplicated contraptions until he passed away in September 1944 .

Often compared to his American counterpart Rube Goldberg. Robinson and  Goldberg essentially depicted the same kind of whimsical devices, their main difference being Goldberg was a trained engineer and his creation were more sensible and practical while Robinson’s conveyed British humour, exaggerated imagination and the artistic skill of a classically trained illustrator.

Heath Robinon’s importance as an innovator in the fields of illustration and advertising was considerable and his complicated inventions provided a source of inspiration for the Founder of The MAD Museum, Richard Simmons, as well as the creators of Wallace and Gromit, Monty Python and many other artists, designers and engineers around the world.