Half-term has kicked off and The MAD Museum has a brand new exhibit to show off to all our visitors this week.

Harley Mayenschein’s Idle-Tyme Rolling Ball Clock (image below) was the first of its kind in the world that told the time in this unique way. From a young age, Harley loved to make all sorts of unusual creations. He regularly gave his inventions away as awards, but it wasn’t until he gave his first Idle-Tyme Rolling Ball Clock away at a local bowling competition that he really noticed people’s reactions. 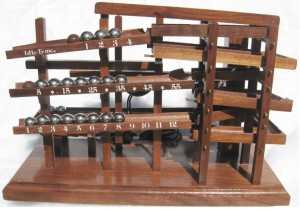 Admirers started asking Harley to make them one of these special clock and before long he had started a business called Idle-Tyme. The company took off and at peak production the team of then 50 workers were making 60 clocks a day.

Sadly Harley past away 30 years ago and after his passing, no one wanted to continue making his creations. That was until recently when his son, Joe started a limited production of the clocks again in memory of his Dad.

Idle-Tyme is on display at The MAD Museum now. Please check out the office Idle-Tyme website too, by clicking here.