Automata during The Middle Ages

The Greeks continued their interest in Automata into the Middle Ages. Again the available material ranges from the purely mythical to the truly genuine. Among the more outlandish tales, one example involves the Emperor Theophilos (829-842 AD) who was reputed to have a throne which could move up towards the ceiling. Stories mention that his palace featured moving, roaring lions.

The 8th Century was thought to see the introduction of the world’s first wind-powered Automata. For instance, wind-powered statues stood over the four domes at the gates to Baghdad. One of the domes featured a lance-carrying horseman that was thought to direct itself at attackers by aid of the wind. 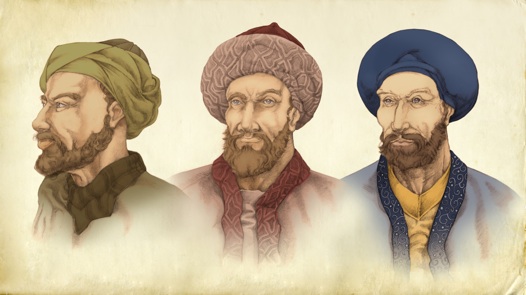 During the 9th Century, again in Baghdad, The Banu Musa (left) were three brothers who devised an “automatic flute player”. It is thought that this was the first working example of a programmable machine. Steam was used to create the flute sounds, which could be adjusted by the user to enable different tunes.

The brothers went on to develop a host of other ingenious devices, including mechanical grabbers, lamps and fountains.

Also around this time, stories exist of Muslim inventors who made trees featuring swinging branches, upon which sat mechanical, singing birds.

In 1206 Al-Jazari published the“Book of Knowledge of Ingenious Mechanical Devices” (right). In it he details an amazing floating boat (below right) on which a water-powered automaton orchestra could play music to entertain guests at royal drinking parties. The contraption included a four-piece band consisting of 2 drummers, a harpist and a flautist, who were complemented by rowing oarsman who helped manoeuvre the boat around the lake.

Al-Jazari had a good sense of humour and many of his inventions were made purely for entertainment value. Once he created trick vessels which appeared to have water in them but when someone tried to drink out of them they were empty.

The orchestra itself worked by means of a rotating drum featuring pegs that in turn operated levers to create a variety different sounds. Other features of this truly remarkable machine enabled the mechanical figures to move arms, legs and heads in a lifelike manner.

The fact that the machine could be manipulated to make different sounds depending on the positions of its pegs, etc, has led many to believe that Al-Jazari’s device represents the first example of a programmable computer.