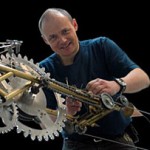 Kinetic objects, such as clocks, animals, and fantastic creatures, appear in the mind and dreams of Piotr Jedrzejewski. Initially they occur as just an outline of a form, a notion, an idea without details. Often they are experienced as only a mood, emotion, or feeling.

Jedrzejewski waits to take a pencil in his hand, letting ideas crystallise and mature in his head before committing himself to a drawing. Since Jedrzejewski was a little boy he had always loved creating machines that were fulfilling absurd functions.

His workshop is full of tools and he uses screws, nails, pins, and cogs. A few years ago he would make every element by hand. This was great fun for Jedrzejewski but limited the size and complexity of his creations. He then started to use more modern technologies, but still stays close to the soul of his works.