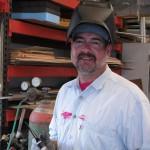 As the son of an U. S. Air Force mechanic, Jim Jenkins realized at a young age his own interest in combining mechanisms and art. Early influences include the work of Swiss sculptor Jean Tinguely and American sculptor George Rickey. As Jim was beginning to study art in college he had the opportunity to view one of Tinguely’s only public sculptures in the U.S., a monumental work titled “Chaos I” located in Columbus, Indiana. It was at that time that he realized the potential of combining art with technology.

Jim received his BFA from Murray State University in Kentucky and a MFA from Syracuse University in New York. After completing his degrees he moved west to head the sculpture program at California State University, Fullerton where he still teaches today. His first public commission was installed in 1997 at the Southwest Aviation Complex at the Van Nuys Airport outside of Los Angeles. In 2003 he was included in an exhibition of neon and kinetic art at Caretta Shiodome in Tokyo.

In 2007 his work was included alongside that of three other notable American kinetic artists (Gregory Barsamian, Arthur Ganson, and Bernie Lubell) in an exhibition titled “Humana Ex Machina” in California. A recent article about his work was published in the October 2011 Russian edition of Popular Mechanics. He also co-authored a book titled Motion Motion: Kinetic Art. In his words, “My role as an artist can best be described as part sculptor, part engineer, and part choreographer.”

Email
Half-term tickets will be able to be booked from October 1st. No pre-booking necessary during the week (only at weekends and school holidays)
+