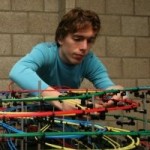 I am Jelle Bakker and I live in Amersfoort (the Netherlands). I was born in Wervershoof (near Hoorn, the Netherlands) in 1983 and my biggest hobby is constructing marble machines. Since 2001 I began constructing more complex room sized marble machines with elevators and multiple paths. My biggest milestone was setting the guiness record longest marble run in the world on 21st May 2009. This marble run was 210.31 meters long. Unfortunately, it’s already broken by someone else in September 2011.

My biggest dream is having a big hall with a giant marble run with thousands of track meters with light shows and multiple paths and lifters.

Website
Email
Pre-booking only required 22nd - 31st October 2022. Not necessary any other time.
+