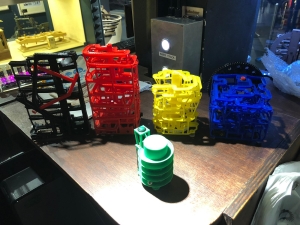 The inspiration for Gualala Gadget came when our master gadget-maker, Jim Blomgren, was exploring the complexities of 3D printing. Jim noticed that most of the things that are 3D-printed these days, while fascinating and very creative, are static objects with no movement at all, like action figures. So Jim decided to create a 3D-printed object that incorporated movement and started devising his first marble machine.

After many months of trial and error, tweaking and changing, he had his first Gualala Gadget working perfectly. Jim has found the process of gadget-designing so enjoyable, he can’t seem to stop himself from creating new gadgets. And in the process, Jim has managed to push the limits of 3D printing.