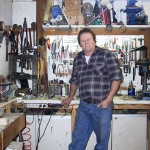 I was born in Titirangi-Auckland-New Zealand in 1954. My parents were both painters. I grew up in a fairly rural environment until 9 years old when my father decided that we were going to emigrate to Greece…. Having travelled to England by ship via Suez, we bought an old bread-delivery van, which we converted into a primitive camper and set off.

After several adventures, we arrived in Greece. The crossing of the Ionian from Brindisi, was not to be repeated at any cost. The small tramp steamer that we were on, with our van lashed to the forward hatch, rolled and wallowed for 48 miserable hours. Athens was a wonderful adventure. A fascinatingly friendly city packed with stimulating smells and sounds. After six months in Greece I returned to New Zealand. Back to Greece in 1970 for a year, with a few months in London as well. I started working in restaurants…..they were my first love.

Having set-up and owned my own, I left for Greece again. The next 27 years I mainly spent charter skippering with spells at other activities as well. Two more restaurants and time spent doing wood work in boat yards and on yachts. I spent 4 years in Crete where I renovated a 17th Cent. house.

Now I live happily in the North of Italy just outside Como and work in my workshop just as many hours as I can! I have two children….Elpitha and Oliver.

Email
Half-term tickets will be able to be booked from October 1st. No pre-booking necessary during the week (only at weekends and school holidays)
+