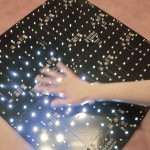 Evil Mad Scientist is a small family-owned company based in Sunnyvale, California. First launched in November 2007, Evil Mad Scientist produces DIY and open-source hardware designs that work alongside their blog, Evil Mad Scientist Laboratories. Today they produce and distribute a selection of components and original kits in support of art, education, and accessibility.

Evil Mad Scientist Laboratories strives to live up to its motto, “Making the World a Better Place, One Evil Mad Scientist at a time.” The company is run by Windell H. Oakay and Lenore M. Edman. Windell is apublished playwright, award winning cartoonist, and obscenely creative amateur chef, he has been variously employed as a quantum mechanic, photographer, and (atomic) clock maker. Some of the things Windell has ended up designing and building include an interactive dining table, a carbon-fiber electric guitar, hard-drive wind chimes, radio-controlled hovercrafts, nixie tube clocks, and magnetohydrodynamic-powered boats.

Lenore, a veteran bike commuter, used to live in Portland, Oregon, where her son Chris got to ride in her bike’s sidecar. Abandoning wet for warm, she moved to Sunnyvale, California, she has helped to popularize edible origami.. Her college studies in classical Greek prepared her well for her career working with professors, librarians, engineers and scientists