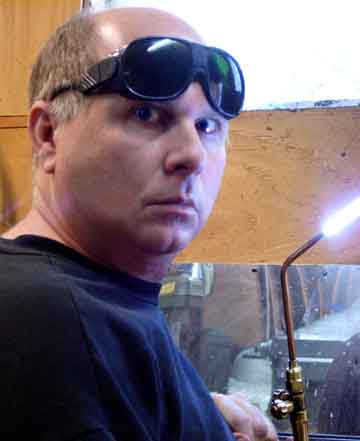 “Building better machines today for an apocalyptic tomorrow”. Bruce Salinger. Bruce Salinger grew up in Southern California in the 60’s and starting inventing from an early age. Some of his first creations titled ‘Music Sequencer’ and ‘Helium-Neon Laser’ comprised of house-hold items and eccentric ideas. After Bruce graduated from High Schools, he secured an apprenticeship with another noted metal sculptor (who also exhibits at The MAD Museum), Greg Quayle. Bruce greatly enjoyed this period, there was revolution in the air and much enthusiasm for metal sculpture and the arts in general. After going his own way, Bruce continued to work on his own kinetic sculptures using single motors and accessible materials. “These sculptures were my way of delving deeper into the mechanical nature of human behavior. The first reaction most viewers had to these sculptures is humor. Then, while the more introspective viewers saw the similarities, the rest would run off to emulate what they had just seen.” Bruce now continues to work on his sculptures at home in California.